» News » Made in Abyss: Binary Star Falling into Darkness comes to PlayStation®4, Nintendo Switch™, and Steam® on September 2, 2022

Made in Abyss: Binary Star Falling into Darkness comes to PlayStation®4, Nintendo Switch™, and Steam® on September 2, 2022

Spike Chunsoft, Inc. today announced the 3D Action RPG Made in Abyss: Binary Star Falling into Darkness will arrive on PlayStation®4, Nintendo Switch™, and Steam® on September 2, 2022, in North America and Europe.

The company also revealed images and profiles for the game's main characters.

The game offers two game modes. "HELLO ABYSS" is a story mode in which players can relive the story of the anime while learning the basic system and how to progress in the game. In "DEEP IN ABYSS," players can enjoy an original story of a new Cave Raider, who takes on the challenge of exploring the depths of the Abyss. Many characters from Made in Abyss appear, and event scenes are fully-voiced by the cast of the anime.

Pre-orders are available now. For details go to: https://www.spike-chunsoft.com/games/made-in-abyss-binary-star-falling-into-darkness/ 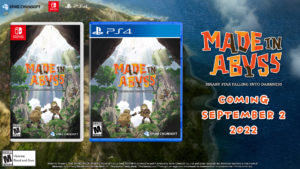 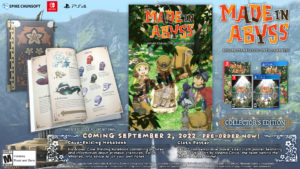