» News » NINTENDO AMERICA END OF THE YEAR SALE! SAVE UP TO 80% ON SPIKE CHUNSOFT, INC. NINTENDO SWITCH GAMES!

NINTENDO AMERICA END OF THE YEAR SALE! SAVE UP TO 80% ON SPIKE CHUNSOFT, INC. NINTENDO SWITCH GAMES! 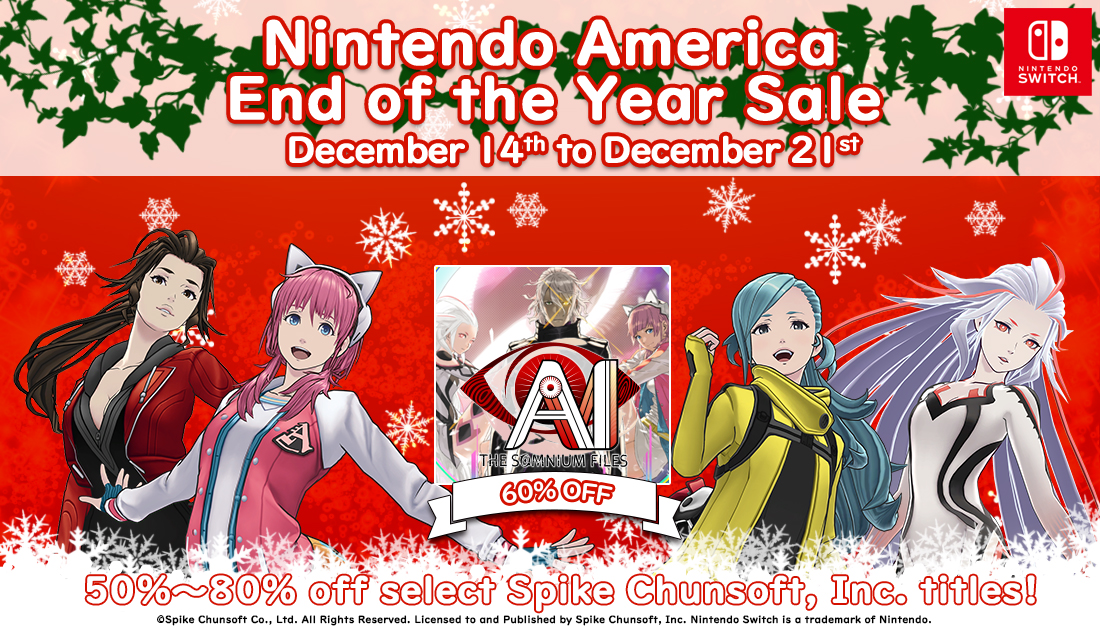 Make your holidays even more joyful with Nintendo Switch™ games! Nintendo of America is running an end of the year sale until December 21, 2020! See below for the applicable titles and discount percentages.

ROBOTICS;NOTES ELITE - 50% OFF
Join the Robot Club and help save the world in ROBOTICS;NOTES ELITE! Play as Kaito Yashio, one of the last two members of Central Tanegashima High's Robot Research Club. He kicks back and relaxes as his counterpart, the reckless club leader Akiho Senomiya, strives to complete their giant robot in order to keep the club from being disbanded. But Kaito's days of relaxation end with the discovery of the mysterious Kimijima Report. It contains instructions involving locations all across the island—and warns of a conspiracy targeting the entire world.
Visit Nintendo eShop for ROBOTICS;NOTES ELITE

ROBOTICS;NOTES DaSH - 50% OFF
Return to Tanegashima and continue the Science Adventure series in ROBOTICS;NOTES DaSH! The island of Tanegashima is preparing for the Summer Festival. Through Nae Tennouji, an acquaintance from JAXA, Kaito Yashio is introduced to Itaru Hashida from the STEINS;GATE series. Itaru claims to be taking a tour of the island, but as time goes on he starts acting rather strangely... Meanwhile, unsettling incidents begin to occur all around them; harbingers of an event that will again plunge the world into chaos.
Visit Nintendo eShop for ROBOTICS;NOTES DaSH

AI: THE SOMNIUM FILES - 60% OFF
Awarded Best Adventure/Visual Novel of 2019 by RPGFan.
The mind never lies… In a near-future Tokyo, detective Kaname Date is on the case of a mysterious serial killer. Date must investigate crime scenes as well as dreams on the hunt for clues. From the mind of Kotaro Uchikoshi (Zero Escape series director), with character design by Yusuke Kozaki (NO MORE HEROES, Fire Emblem series), a thrilling neo-noir detective adventure is about to unfold.
Visit Nintendo eShop page for AI: THE SOMNIUM FILES

STEINS;GATE 0 - 60% OFF
A new story in the critically-acclaimed STEINS;GATE series. From the depths of despair--explore a whole new world line. Your favorite characters return alongside a brand new cast! STEINS;GATE 0 continues the time travelling theme - but adds artificial intelligence as its central hook. Help a group of young students bend time to their will and prevent the onset of World War 3.
Visit Nintendo eShop for STEINS;GATE 0