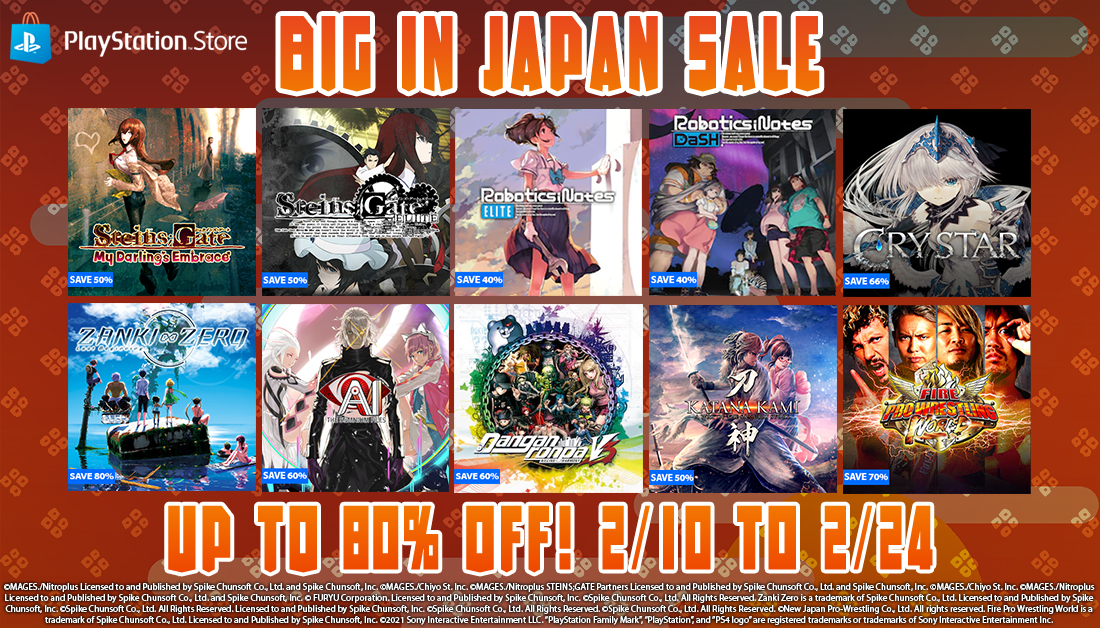 Big in Japan sale starts on PlayStation™Store from February 10, 2021 - February 24, 2021 for North America and Europe! Popular titles like Danganronpa V3, the ROBOTICS;NOTES series and AI: THE SOMNIUM FILES are available with a discounted price. Find out more about the games and discount percentages below.

Danganronpa V3: Killing Harmony - 60%
Welcome to a new world of Danganronpa, and prepare yourself for the biggest, most exhilarating episode yet. Set in a “psycho-cool” environment, a new cast of 16 characters find themselves kidnapped and imprisoned in a school. Inside, some will kill, some will die, and some will be punished. Reimagine what you thought high-stakes, fast-paced investigation was as you investigate twisted murder cases and condemn your new friends to death.
Go to Danganronpa V3: Killing Harmony PlayStation Store page

ROBOTICS;NOTES ELITE - 40% OFF
Join the Robot Club and help save the world in ROBOTICS;NOTES ELITE! Play as Kaito Yashio, one of the last two members of Central Tanegashima High's Robot Research Club. He kicks back and relaxes as his counterpart, the reckless club leader Akiho Senomiya, strives to complete their giant robot in order to keep the club from being disbanded. But Kaito's days of relaxation end with the discovery of the mysterious Kimijima Report. It contains instructions involving locations all across the island—and warns of a conspiracy targeting the entire world.
Go to ROBOTICS;NOTES ELITE PlayStation Store page

CRYSTAR and DLC BUNDLES- 66% OFF
For when I weep, then I am strong.
A girl named Rei and Mirai, her little sister, are dragged into the afterworld of Purgatory. To save her sister, Rei signs a contract with the Demons of Purgatory to fight the monsters infesting their world. Rei and her fellow Executors must face their pasts and confront their tears to overcome the Torments and monsters ahead of them. Will Rei save her sister’s Soul before it’s too late?
Go to CRYSTAR PlayStation Store Page

428: Shibuya Scramble - 80% OFF
Revolving around the lives of five protagonists who get dragged into a kidnapping case, you must make choices for each character that will undoubtedly alter the story for another, all within a ten-hour period. This creates the possibility of over 90 different endings! With an unconventional palette consisting of text, live action stills, and video sequences to paint the narrative, 428 provides humor, uniqueness, and much intrigue that will entice you to reach all endings.
Go to 428 PlayStation Store Page