» News » Save Up to 85% on Select Spike Chunsoft, Inc. Titles with PlayStation™ Store End of the Year Deals

Save Up to 85% on Select Spike Chunsoft, Inc. Titles with PlayStation™ Store End of the Year Deals 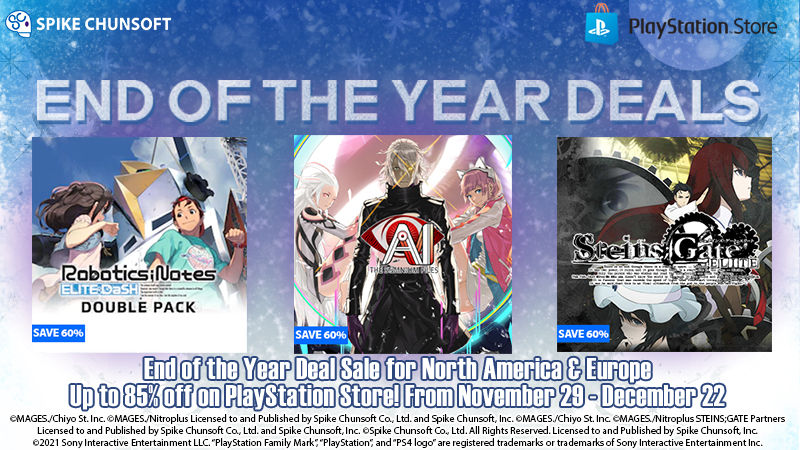 PlayStation™Store End of the Year Deals are finally here. Players in North America and Europe can save up to 85% on these hit Spike Chunsoft, Inc. PS4™ titles from November 29 to December 22, 2021. Visit the PlayStation Store for details.

AI: THE SOMNIUM FILES - 60% Off
The mind never lies… In a near-future Tokyo, detective Kaname Date is on the case of a mysterious serial killer. Date must investigate crime scenes as well as dreams on the hunt for clues. From the mind of Kotaro Uchikoshi (Zero Escape series director), with character design by Yusuke Kozaki (NO MORE HEROES, Fire Emblem series), a thrilling neo-noir detective adventure is about to unfold. Go to AI PlayStation Store Page

KATANA KAMI: A Way of the Samurai Story - 60% Off
Wanderer Set - 60% Off
Five Famous Swords Set - 60%o Off
Play as a ronin during Japan’s Meiji Restoration in the volatile Rokkotsu Pass. The swordsmith Dojima falls into debt and his beautiful daughter is taken as collateral. Help repay the debt by crafting swords by day and exploring the mysterious, twisting dungeons of the Ipponmatsu Cave for valuable materials at night. Go to KATANA KAMI PlayStation Store Page

428: Shibuya Scramble - 85% Off (North America Only)
Revolving around the lives of five protagonists who get dragged into a kidnapping case, you must make choices for each character that will undoubtedly alter the story for another, all within a ten-hour period. This creates the possibility of over 90 different endings! With an unconventional palette consisting of text, live-action stills, and video sequences to paint the narrative, 428 provides humor, uniqueness, and much intrigue that will entice you to reach all endings. Go to 428 PlayStation Store Page