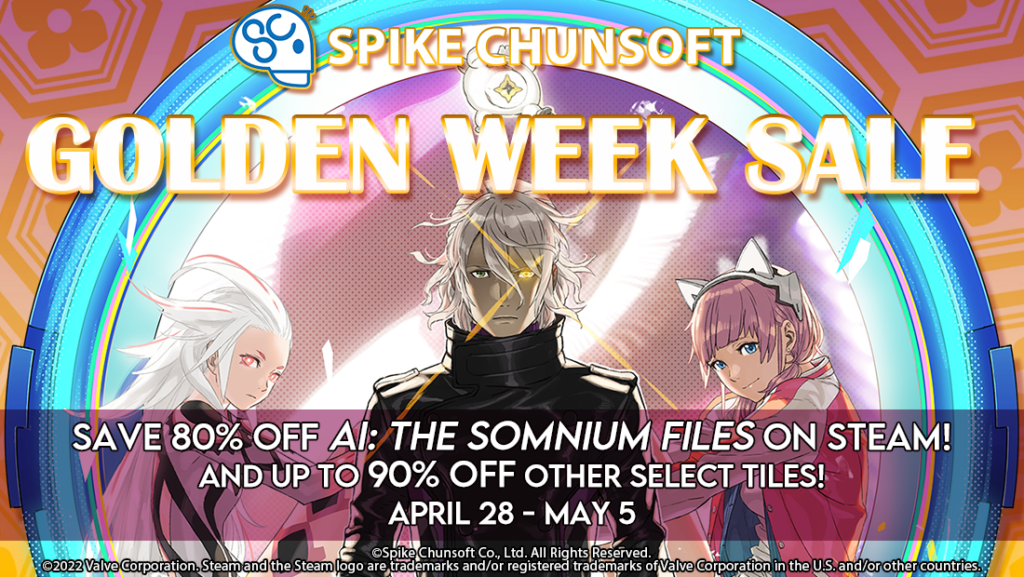 It's time for the Steam® Golden Week Sale. Save up to 90% on select Spike Chunsoft titles from April 28 through May 5, 2022. Find out more about the games and discounts below. For additional details visit the Golden Week Sale page on Steam.

428: Shibuya Scramble - 80% OFF
Revolving around the lives of five protagonists who get dragged into a kidnapping case, you must make choices for each character that will undoubtedly alter the story for another, all within a ten-hour period. This creates the possibility of over 90 different endings! With an unconventional palette consisting of text, live action stills, and video sequences to paint the narrative, 428 provides humor, uniqueness, and much intrigue that will entice you to reach all endings. Go to 428 Steam Store Page

CRYSTAR - 60% OFF
CRYSTAR DLC - 50% to 60% OFF
For when I weep, then I am strong. A girl named Rei and Mirai, her little sister, are dragged into the afterworld of Purgatory. To save her sister, Rei signs a contract with the Demons of Purgatory to fight the monsters infesting their world. Rei and her fellow Executors must face their pasts and confront their tears to overcome the Torments and monsters ahead of them. Will Rei save her sister’s Soul before it’s too late? Go to CRYSTAR Steam Store Page

ROBOTICS;NOTES ELITE - 60% OFF
Thanks to the rising popularity of the PhoneDroid—a device which features augmented reality (A.R.)—the age of advanced technology has finally reached Tanegashima. On that island, Central Tanegashima High's "Robot Research Club" is about to have their club disbanded. Go to ROBOTICS;NOTES ELITE Steam Store Page

ROBOTICS;NOTES DaSH - 60% OFF
Half a year after the events of ROBOTICS;NOTES ELITE, Kaito Yashio is introduced to Itaru Hashida through Nae Tennouji. Unsettling incidents start occurring all around them, harbingers of an event that will again plunge the world into chaos.Go to ROBOTICS;NOTES DaSH Steam Store Page

YU-NO: A girl who chants love at the bound of this world. - 60% OFF
Your Love Awaits Beyond This World. Can you find the hidden world waiting beyond Sakaimachi? Fall in love with every character to reach the true ending to this 40+ hour visual novel. Go to YU-NO Steam Store Page