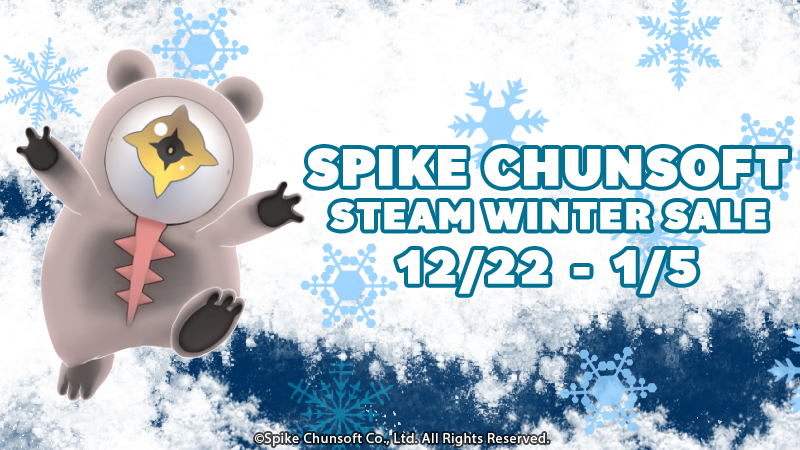 During the Steam® Winter Sale from December 22, 2021, to January 5, 2022, select Spike Chunsoft titles are up to 90% off. For details visit the Steam sale page at: https://store.steampowered.com/publisher/SPIKECHUNSOFT/sale/winter

Zanki Zero: Last Beginning - 60% Off
God created the world in seven days. It only took one day for humans to destroy the world. Life as we knew it sank to the depths of the sea…until yesterday. We do not yet know the broken world and the reasons left behind there. An earth where ruins drift about. Buildings, houses, light posts. Cars, traffic lights, asphalt… Modern civilization was destroyed, becoming nothing more than debris wading in the sea. New ruins drift one after the other before the protagonist, who lives on one of those decaying islands. Go to the ZANKI ZERO Steam Store Page

Conception PLUS: Maidens of the Twelve Stars - 70% Off
The baby boom is back as this Star-Filled RPG is reborn. Itsuki Yuge is summoned to the magical world of Granvania to save it from evil Impurities. As the savior from another world known as “God’s Gift,” Itsuki and his Star Children, born between him and the 12 Star Maidens, are the only ones capable of banishing these Impurities. To return home, he must save Granvania with his Star Children. Go to the Conception PLUS Steam Store Page

Conception II: Children of the Seven Stars - 80% Off
It's time for classmating. Monsters have invaded the world of Aterra, and only a few special individuals, imbued with the power of the Star God, are equipped to fight it. Combine your Star power to make magical Star Children to boost up your forces in battle. Go to the Conception II Steam Store Page

AI: THE SOMNIUM FILES - 60% Off
RPGFan Editor's Choice & Best Adventure/Visual Novel of 2019 Award. The mind never lies… In a near-future Tokyo, detective Kaname Date is on the case of a mysterious serial killer. Date must investigate crime scenes as well as dreams on the hunt for clues. From the mind of Kotaro Uchikoshi (Zero Escape series director), with character design by Yusuke Kozaki (NO MORE HEROES, Fire Emblem series), a thrilling neo-noir detective adventure is about to unfold. Go to the AI Steam Store Page

STEINS;GATE 0 - 60% Off
If you can't save the one you love… How can you save humanity? Sequel to the visual novel cult classic. Experience an alternate worldline of STEINS;GATE. Go to the STEINS;GATE 0 Steam Store Page

ROBOTICS;NOTES ELITE - 60% Off
Thanks to the rising popularity of the PhoneDroid—a device that features augmented reality (A.R.)—the age of advanced technology has finally reached Tanegashima. On that island, Central Tanegashima High's "Robot Research Club" is about to have their club disbanded. Go to the ROBOTICS;NOTES ELITE Steam Store Page

ROBOTICS;NOTES DaSH - 60% Off
Half a year after the events of ROBOTICS;NOTES ELITE, Kaito Yashio is introduced to Itaru Hashida through Nae Tennouji. Unsettling incidents start occurring all around them, harbingers of an event that will again plunge the world into chaos. Go to the ROBOTICS;NOTES DaSH Steam Store Page

YU-NO: A girl who chants love at the bound of this world. - 70% Off
Your Love Awaits Beyond This World. Can you find the hidden world waiting beyond Sakaimachi? Fall in love with every character to reach the true ending to this 40+ hour visual novel. Go to the YU-NO Steam Store Page

Re:ZERO -Starting Life in Another World- The Prophecy of the Throne - 50% Off
Enjoy a new Re:ZERO storyline, fully supervised by the series author Tappei Nagatsuki. Featuring brand new characters designed by the original artist Shinichirou Otsuka as well as your favorites from the series! Go to the Re:ZERO The Prophecy of the Throne Steam Store Page

428: Shibuya Scramble - 85% Off
Revolving around the lives of five protagonists who get dragged into a kidnapping case, you must make choices for each character that will undoubtedly alter the story for another, all within a ten-hour period. This creates the possibility of over 90 different endings! With an unconventional palette consisting of text, live-action stills, and video sequences to paint the narrative, 428 provides humor, uniqueness, and much intrigue that will entice you to reach all endings. Go to the 428 Steam Store Page

Mystery Chronicle: One Way Heroics - 90% Off
Play your way through the different maps generated with every playthrough, constantly on the move away from the calamity of light, the Shine Raid, to your left and on your final battle with the Fallen Angel Alma. There's no turning back, once this thrilling one-way adventure begins. Go to Mystery Chronicle: One Way Heroics Steam Store Page

CRYSTAR - 70% Off
For when I weep, then I am strong. A girl named Rei and Mirai, her little sister, are dragged into the afterworld of Purgatory. To save her sister, Rei signs a contract with the Demons of Purgatory to fight the monsters infesting their world. Rei and her fellow Executors must face their pasts and confront their tears to overcome the Torments and monsters ahead of them. Will Rei save her sister’s soul before it’s too late? Go to the CRYSTAR Steam Store Page

Way of the Samurai 3 - 70% Off
Honour, sacrifice, betrayal… Your choices make you who you are. How will history remember you? Choose your friends and enemies carefully in a game where every decision has far-reaching consequences, and where finishing the game is just the beginning of your journey… Go to the Way of the Samurai 3 Steam Store Page

KATANA KAMI: A Way of the Samurai Story - 60% Off
The Way of the Samurai is forged in battle. Help the swordsmith Dojima pay off his debt after his beautiful daughter is taken as collateral by crafting swords by day and exploring mysterious, twisting dungeons for valuable materials at night. Go to the KATANA KAMI Steam Store Page