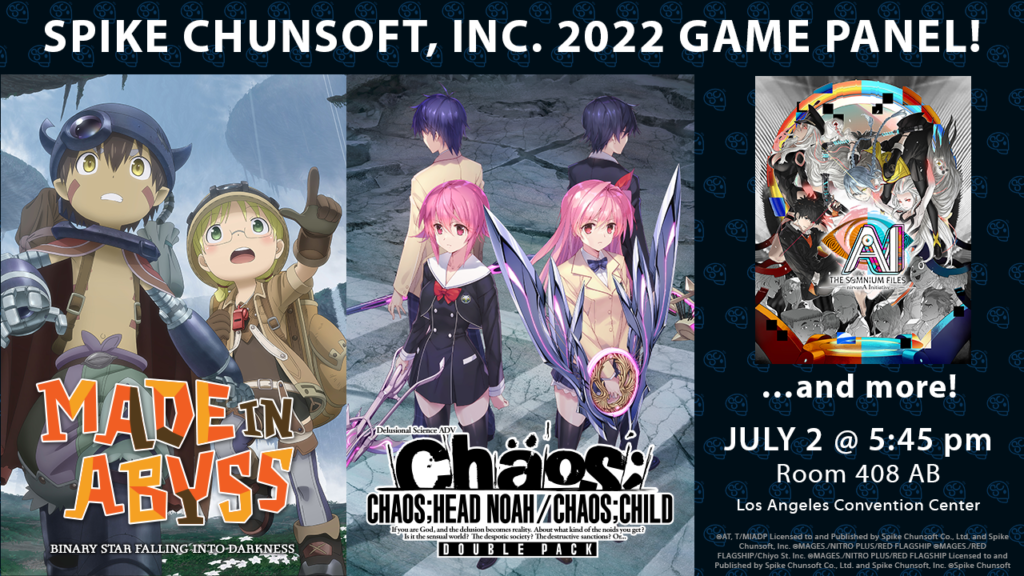 Spike Chunsoft, Inc. is ready to welcome you back to Anime Expo 2022 in-person, and invites you to join us for a special look at each of our upcoming titles. Take a deep dive into the highly-anticipated video game adaptation of Made in Abyss. Open the door to delusions with the CHAOS;HEAD NOAH / CHAOS;CHILD DOUBLE PACK for Nintendo Switch. The Spike Chunsoft, Inc. team is also preparing to announce some exciting news about a new title.

For fans of AI: THE SOMNIUM FILES – nirvanA Initiative be sure to join us for an appreciation event. We’ll also announce the favorites from the Twitter AI: THE SOMNIUM FILES Fanart Campaign, as chosen by the game’s creators Kotaro Uchikoshi, Yusuke Kozaki, Akira Okada, and the Spike Chunsoft team. We also have exclusive giveaways that up until now you’ve only ever dreamed of. No spoilers! You’d have to be an ABIS agent to get any secrets out of us.

…and of course much more.

Made in Abyss: Binary Star Falling into Darkness
Made in Abyss: Binary Star Falling into Darkness is an Action RPG in which players themselves descend into the world of the Abyss and grow through their experience in its depths. The game, supervised by original series author Akihito Tsukushi, recreates the world of the Abyss in 3D, including battles with creatures, collecting relics, and "The Curse of the Abyss". Fans are sure to enjoy the dark fantasy that remains true to the unique flavor of the original work. The 3D Action RPG arrives on PlayStation®4, Nintendo Switch™, and Steam® on September 2, 2022, in North America and Europe.

AI: THE SOMNIUM FILES - nirvanA Initiative
Six years ago, the right half of a corpse was discovered. The left half was never found…until six years later, completely fresh with no signs of decay. Now, Special Agents Mizuki and Ryuki, along with their AI partners Aiba and Tama, are tasked to solve the bizarre Half Body serial killings while unveiling the mysterious plot known only as the Nirvana Initiative… AI: THE SOMNIUM FILES - nirvanA Initiative will be available for Nintendo Switch™, PlayStation®4, Xbox One, Windows 10, and Steam® on June 24, 2022, in North America and July 8, 2022, in Europe and Oceania.