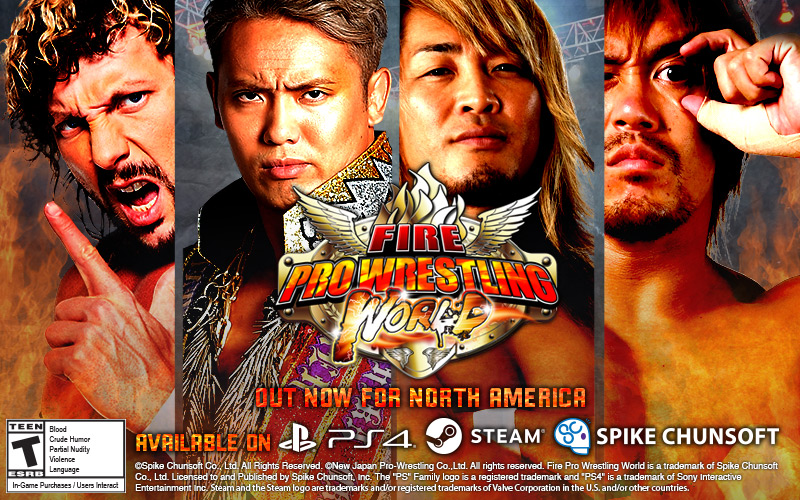 Now you can build your dream match! Fire Pro Wrestling World is out now! Please make sure to download and install the patch before you play.

*NOTE: If you edit or remove a DLC wrestler from their assigned Stable, they will be reassigned to the [Retired] section.

This patch enables the player to upload custom tracks to the BGM Import for use as Theme Music and Match BGM.

To use this feature:

1) Place the MP3 files you want to import on a USB storage device in the directory MUSIC/FPW and connect it to the PlayStation®4.

2) Go to Options from the Main Menu and select BGM Import.

4) The MP3s will then be selectable as entrance theme music in Wrestler Edit and as Match BGM music in match Settings.

We recommend you back up your save data before updating.

We will release more information about upcoming DLC content and release dates in the future.

Fixed issue where wrestler's theme would not play after a match.

>Adjustments made to online play.
*Match types with multiple rounds have been temporarily limited to one round. This affects:
-SWA Rules Match
-Gruesome Fighting
-S-1 Rules Match

Future Bug Fixes
For current bugs, we are actively working on fixes.

If these issues still occur after installing the patch, please follow the steps below to re-install the patch.

How to Re-install the Patch
1. Confirm that FPWW is closed.
2. On the PS4 home menu, select Settings > Application Save Data > Save Data in Storage > Delete.
This will delete current FPWW save data.
3. Confirm the latest patch is installed. While the FPWW icon is selected on the PS4 home menu, press the Options button > Check for Update.
4. Launch FPWW.