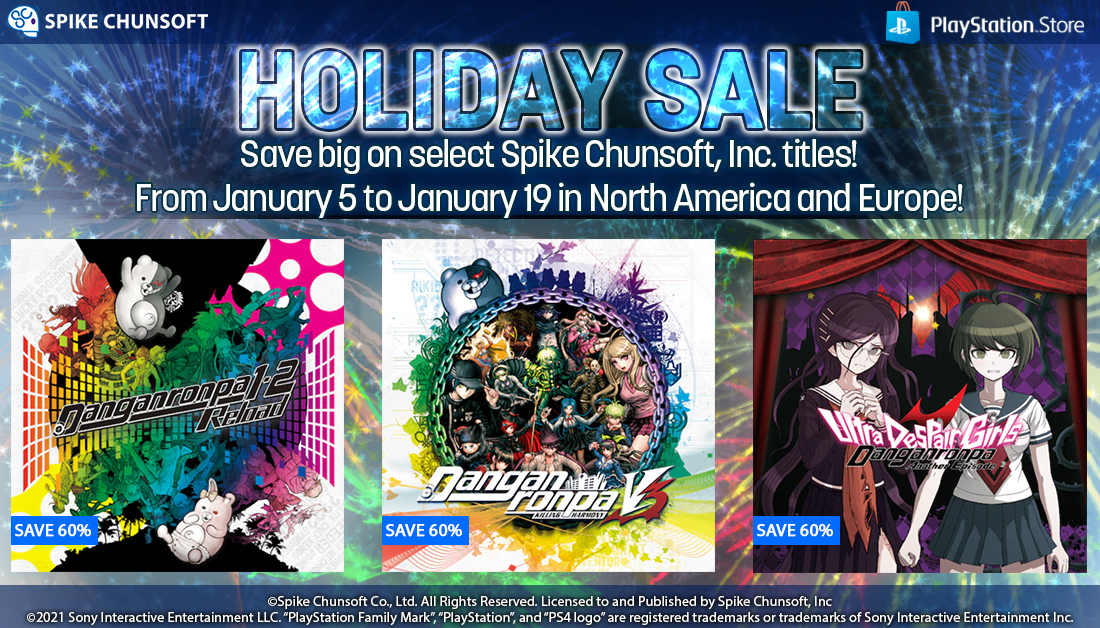 The PlayStation™ Store Holiday Sale has arrived. Players in North America and Europe can save up to 60% on these hit Spike Chunsoft, Inc. titles for PS4™ from January 5 to January 19, 2022. Visit the PlayStation Store for details.

Danganronpa 1•2 Reload - 60% Off
Hope's Peak Academy—home to the nation's best and brightest high school students...and your new prison. You and your classmates have been trapped here, forced into a winner-takes-all killing game. You'll have to solve the mystery of the school to survive, but be careful what you wish for—sometimes there’s nothing more deadly than the truth... You and your classmates at Hope's Peak Academy have been brought to Jabberwock Island by your teacher. It seems fun at first...until Monokuma returns to restart his murderous game! Solve the island's mysteries to escape. Go to the Danganronpa 1•2 Reload PlayStation Store Page

Danganronpa V3: Killing Harmony - 60% Off
Welcome to a new world of Danganronpa, and prepare yourself for the biggest, most exhilarating episode yet. Set in a “psycho-cool” environment, a new cast of 16 characters finds themselves kidnapped and imprisoned in a school. Inside, some will kill, some will die, and some will be punished. Reimagine what you thought high-stakes, fast-paced investigation was as you investigate twisted murder cases and condemn your new friends to death. Go to the Danganronpa V3: Killing Harmony PlayStation Store Page

Danganronpa Another Episode: Ultra Despair Girls - 60% Off
Komaru Naegi, little sister to Makoto Naegi, has been imprisoned inside a mysterious apartment for over a year. One day, she is rescued by Byakuya Togami of Future Foundation, but the rescue is derailed by a sudden attack of hundreds of Monokumas. Komaru soon discovers that the city has been taken over by a group of children calling themselves the Warriors of Hope. Their leader, Monaca, declares that the city will be the site of a “children’s paradise,” and to accomplish this, all the adults will be exterminated. Komaru teams up with Toko Fukawa to try to survive the rampaging Monokumas, escape the crafty Monokuma Kids, and uncover the secrets of the city. Go to the Danganronpa Another Episode: Ultra Despair Girls PlayStation Store Page