» News » Save Up to 85% on Select Spike Chunsoft, Inc. Titles During the Nintendo eShop Europe New Year Sale

Save Up to 85% on Select Spike Chunsoft, Inc. Titles During the Nintendo eShop Europe New Year Sale 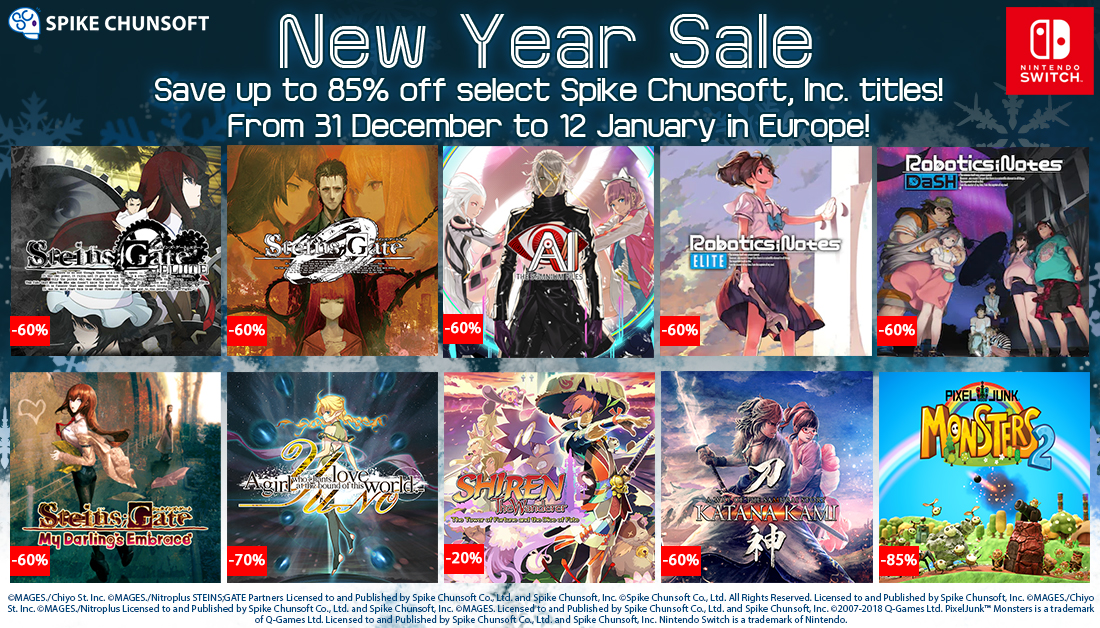 Players can save up to 85% on select Spike Chunsoft, Inc. titles for Nintendo Switch during the Nintendo eShop Europe New Year Sale happening December 31, 2021, until January 12, 2022. For details visit Nintendo eShop. Discounted titles include the following hits.

AI: THE SOMNIUM FILES - 60% Off
RPGFan Editor's Choice & Best Adventure/Visual Novel of 2019 Award. The mind never lies… In a near-future Tokyo, detective Kaname Date is on the case of a mysterious serial killer. Date must investigate crime scenes as well as dreams on the hunt for clues. From the mind of Kotaro Uchikoshi (Zero Escape series director), with character design by Yusuke Kozaki (NO MORE HEROES, Fire Emblem series), a thrilling neo-noir detective adventure is about to unfold. Visit Nintendo eShop page for AI: THE SOMNIUM FILES (UK)

KATANA KAMI: A Way of the Samurai Story - 60% Off
Wanderer Set DLC - 45% to 50% Off*
Five Famous Swords Set DLC - 45% to 50% Off*
*Visit the Nintendo eShop in your region for details.
Play as a ronin during Japan’s Meiji Restoration in the volatile Rokkotsu Pass. The swordsmith Dojima falls into debt and his beautiful daughter is taken as collateral. Help repay the debt by crafting swords by day and exploring the mysterious, twisting dungeons of the Ipponmatsu Cave for valuable materials at night. Visit Nintendo eShop for KATANA KAMI: A Way of the Samurai Story (UK)