» News » Save Up to 85% on Select Spike Chunsoft, Inc. Titles During the Nintendo of America New Year Sale

Save Up to 85% on Select Spike Chunsoft, Inc. Titles During the Nintendo of America New Year Sale 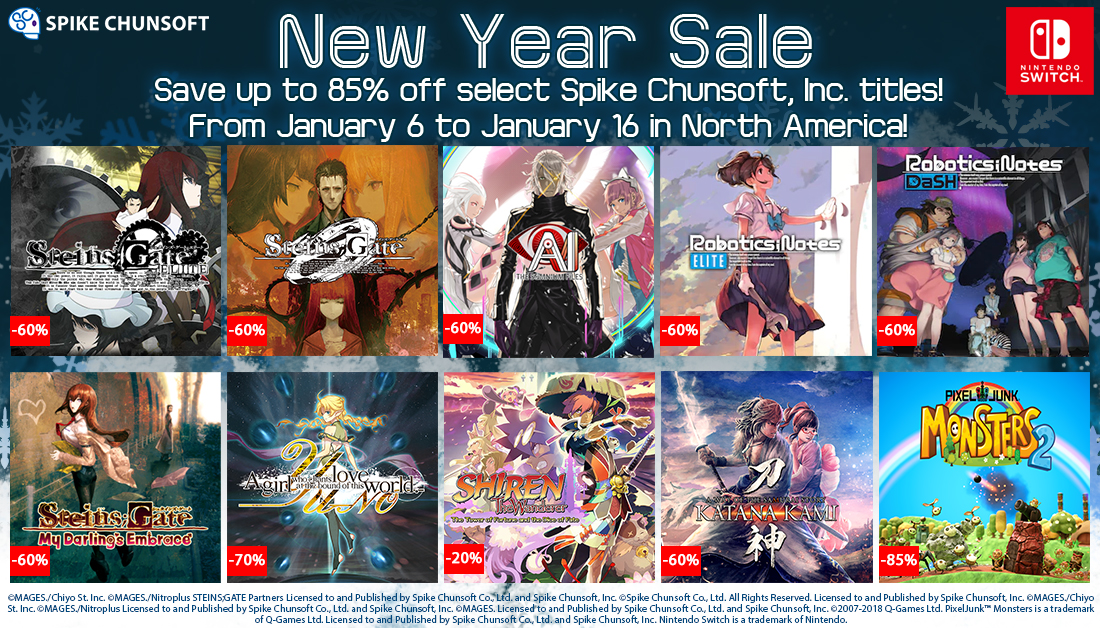 Players can save up to 85% on select Spike Chunsoft, Inc. titles for Nintendo Switch during the Nintendo of America New Year Sale, happening January 6 to January 16, 2022, on Nintendo eShop.

AI: THE SOMNIUM FILES - 60% Off
Awarded Best Adventure/Visual Novel of 2019 by RPGFan
The mind never lies… In a near-future Tokyo, detective Kaname Date is on the case of a mysterious serial killer. Date must investigate crime scenes as well as dreams on the hunt for clues. From the mind of Kotaro Uchikoshi (Zero Escape series director), with character design by Yusuke Kozaki (NO MORE HEROES, Fire Emblem series), a thrilling neo-noir detective adventure is about to unfold. Visit Nintendo eShop for AI: THE SOMNIUM FILES

STEINS;GATE 0 - 60% Off
A new story in the critically-acclaimed STEINS;GATE series. From the depths of despair--explore a whole new world line. Your favorite characters return alongside a brand new cast. STEINS;GATE 0 continues the time-traveling theme - but adds artificial intelligence as its central hook. Help a group of young students bend time to their will and prevent the onset of World War 3. Visit Nintendo eShop for STEINS;GATE 0