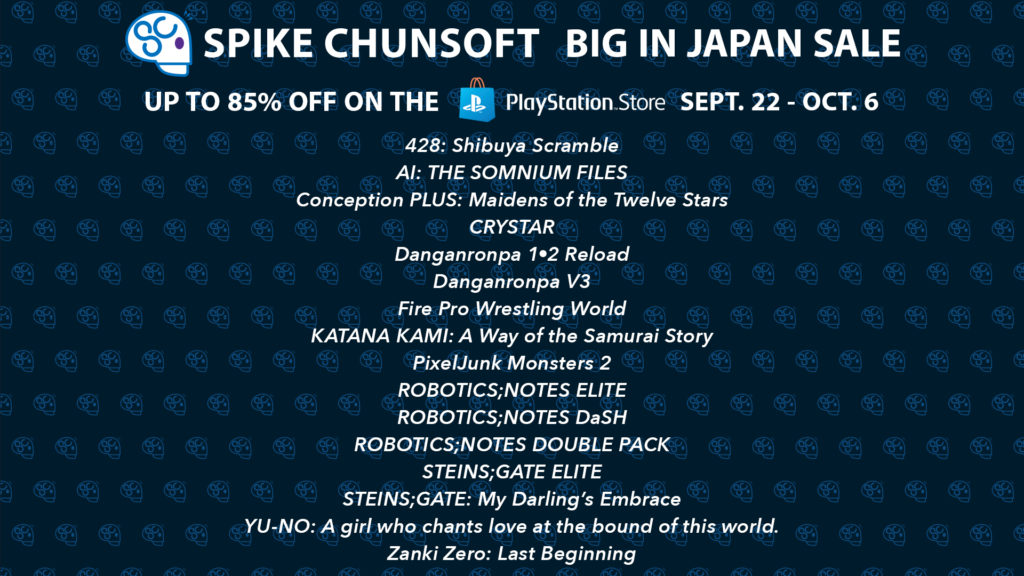 The PlayStation™Store Big in Japan Sale for North America and Europe runs from September 22, 2021 to October 6, 2021! Spike Chunsoft, Inc.'s PS4™ titles are up to 85% off! Find out more about the games and discount percentages below.

AI: THE SOMNIUM FILES - 60% OFF of the new reduced price!
(Original price $59.99 | €59,99 → New reduced price $39.99 | €39,99 → Big in Japan Sale price $15.99 | €15.99)
The mind never lies… In a near-future Tokyo, detective Kaname Date is on the case of a mysterious serial killer. Date must investigate crime scenes as well as dreams on the hunt for clues. From the mind of Kotaro Uchikoshi (Zero Escape series director), with character design by Yusuke Kozaki (NO MORE HEROES, Fire Emblem series), a thrilling neo-noir detective adventure is about to unfold.
Go to AI PlayStation Store Page

Danganronpa V3: Killing Harmony - 60% OFF
Welcome to a new world of Danganronpa, and prepare yourself for the biggest, most exhilarating episode yet. Set in a “psycho-cool” environment, a new cast of 16 characters find themselves kidnapped and imprisoned in a school. Inside, some will kill, some will die, and some will be punished. Reimagine what you thought high-stakes, fast-paced investigation was as you investigate twisted murder cases and condemn your new friends to death.
Go to Danganronpa V3: Killing Harmony PlayStation Store Page

Danganronpa 1•2 Reload - 60% OFF
Hope's Peak Academy—home to the nation's best and brightest high school students...and your new prison. You and your classmates have been trapped here, forced into a winner-takes-all killing game. You'll have to solve the mystery of the school to survive, but be careful what you wish for—sometimes there’s nothing more deadly than the truth...
You and your classmates at Hope's Peak Academy have been brought to Jabberwock Island by your teacher. It seems fun at first...until Monokuma returns to restart his murderous game! Solve the island's mysteries to escape!
Go to Danganronpa 1•2 Reload PlayStation Store Page

Re:ZERO -Starting Life in Another World- The Prophecy of the Throne - 50% OFF
Enjoy a new Re:ZERO storyline, fully supervised by the series author Tappei Nagatsuki!
Featuring brand new characters designed by the original artist Shinichirou Otsuka as well as your favorites from the series!
Go to Re:ZERO The Prophecy of the Throne PlayStation Store Page

ROBOTICS;NOTES ELITE - 60% OFF
Join the Robot Club and help save the world in ROBOTICS;NOTES ELITE! Play as Kaito Yashio, one of the last two members of Central Tanegashima High's Robot Research Club. He kicks back and relaxes as his counterpart, the reckless club leader Akiho Senomiya, strives to complete their giant robot in order to keep the club from being disbanded. But Kaito's days of relaxation end with the discovery of the mysterious Kimijima Report. It contains instructions involving locations all across the island—and warns of a conspiracy targeting the entire world.
Go to ROBOTICS;NOTES ELITE PlayStation Store Page

ROBOTICS;NOTES DaSH - 60% OFF
Return to Tanegashima and continue the Science Adventure series in ROBOTICS;NOTES DaSH! The island of Tanegashima is preparing for the Summer Festival. Through Nae Tennouji, an acquaintance from JAXA, Kaito Yashio is introduced to Itaru Hashida from the STEINS;GATE series. Itaru claims to be taking a tour of the island, but as time goes on he starts acting rather strangely... Meanwhile, unsettling incidents begin to occur all around them; harbingers of an event that will again plunge the world into chaos.
Go to ROBOTICS;NOTES DaSH PlayStation Store Page

KATANA KAMI: A Way of the Samurai Story - 60% OFF
Wanderer Set - 60% OFF
Five Famous Swords Set - 60% OFF
Play as a ronin during Japan’s Meiji Restoration in the volatile Rokkotsu Pass. The swordsmith Dojima falls into debt and his beautiful daughter is taken as collateral. Help repay the debt by crafting swords by day and exploring the mysterious, twisting dungeons of the Ipponmatsu Cave for valuable materials at night.
Go to KATANA KAMI PlayStation Store Page

Conception PLUS - 70% OFF
The baby boom is back as this Star-Filled RPG is reborn!
Itsuki Yuge is summoned to the magical world of Granvania to save it from evil Impurities.
As the savior from another world known as “God’s Gift,” Itsuki and his Star Children, born between him and the 12 Star Maidens, are the only ones capable of banishing these Impurities. To return home, he must save Granvania with his Star Children!
Go to Conception PLUS PlayStation Store Page

YU-NO: A girl who chants love at the bound of this world. - 70% OFF
Your Love Awaits Beyond This World. Can you find the hidden world waiting beyond Sakaimachi? Fall in love with every character to reach the true ending to this 40+ hour visual novel.
Go to YU-NO PlayStation Store Page

428: Shibuya Scramble - 85% OFF
A kidnapping on the streets of Shibuya brings together a hot-blooded detective, hard-hitting journalist, former gang leader, the head researcher of a big pharma manufacturer and a part-timer stuck in cat costume for a series of events each more unexpected and outrageous than the last. Can they—or the city itself—make it through the day?
Go to 428 PlayStation Store Page