» News » Save Up to 85% on Select Spike Chunsoft, Inc. Titles During the Nintendo of America June Game Sale

Save Up to 85% on Select Spike Chunsoft, Inc. Titles During the Nintendo of America June Game Sale 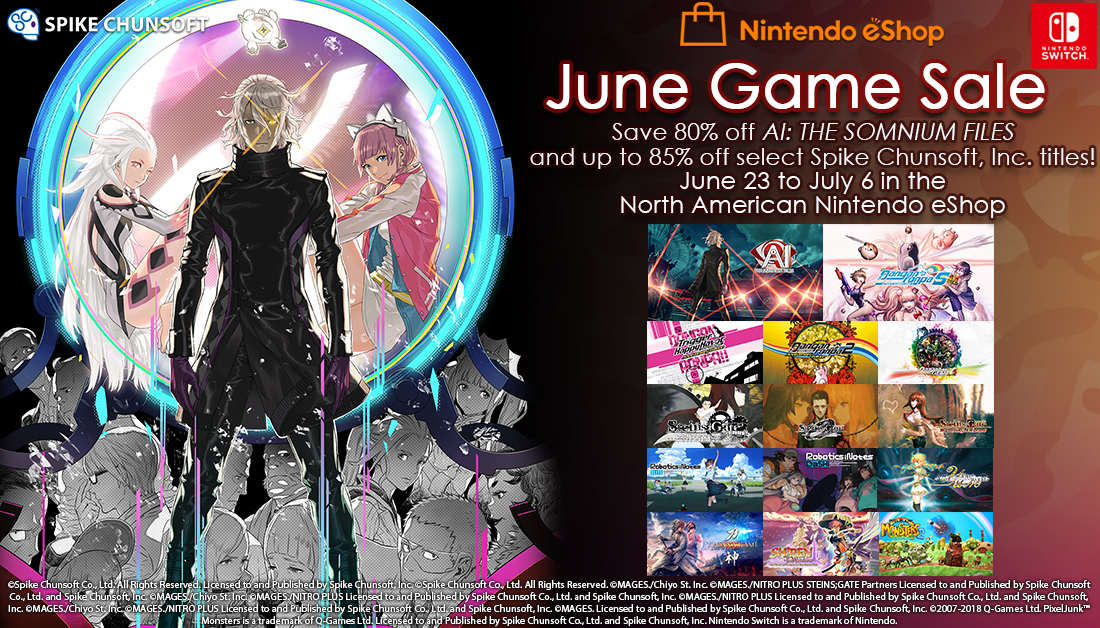 AI: THE SOMNIUM FILES - 80% Off
Awarded Best Adventure/Visual Novel of 2019 by RPGFan
The mind never lies… In a near-future Tokyo, detective Kaname Date is on the case of a mysterious serial killer. Date must investigate crime scenes as well as dreams on the hunt for clues. From the mind of Kotaro Uchikoshi (Zero Escape series director), with character design by Yusuke Kozaki (NO MORE HEROES, Fire Emblem series), a thrilling neo-noir detective adventure is about to unfold. Visit Nintendo eShop page for AI: THE SOMNIUM FILES

Danganronpa: Trigger Happy Havoc Anniversary Edition - 50% Off
Hope’s Peak Academy is home to Japan’s best and brightest high school students—the beacons of hope for the future. But that hope suddenly dies when Makoto Naegi and his classmates find themselves imprisoned in the school, cut off from the outside world and subject to the whims of a strange, murderous little bear named Monokuma. He pits the students against each other, promising freedom to anyone who can murder a fellow classmate and get away with it. It’s up to you to find out who Monokuma really is, and why you've been taken from the world you once knew. But be careful what you wish for—sometimes there’s nothing more deadly than the truth…This 10th Anniversary edition comes with a gallery feature that allows you to view event illustrations, scenes, and listen to voiced dialogue! Visit Nintendo eShop page for Danganronpa: Trigger Happy Havoc Anniversary Edition

Danganronpa 2: Goodbye Despair Anniversary Edition - 30% Off
Jabberwock Island – once a popular tourist destination, this now uninhabited island remains oddly pristine. You and your classmates at the elite Hope’s Peak Academy have been brought to this island by your super-cute teacher for a “lovey-dovey, heart-throbbing school trip.” Everyone seems to be having fun in the sun…until Monokuma returns to restart his murderous game! Trapped on this island of mutual killing, your only hope of escape rests in solving the island’s mysteries. But be warned—sometimes the truth can be its own despair…This 10th Anniversary edition comes with a gallery feature that allows you to view event illustrations, scenes, and listen to voiced dialogue! Visit Nintendo eShop page for Danganronpa 2: Goodbye Despair Anniversary Edition

Danganronpa V3: Killing Harmony Anniversary Edition - 30% Off
Welcome to a new world of Danganronpa, and prepare yourself for the biggest, most exhilarating episode yet. Set in a “psycho-cool” environment, a new cast of 16 characters find themselves kidnapped and imprisoned in a school. Inside, some will kill, some will die, and some will be punished. Reimagine what you thought high-stakes, fast-paced investigation was as you investigate twisted murder cases and condemn your new friends to death. This 10th Anniversary edition comes with a gallery feature that allows you to view event illustrations, scenes, and listen to voiced dialogue! Visit Nintendo eShop page for Danganronpa V3: Killing Harmony Anniversary Edition

STEINS;GATE 0 - 60% Off
A new story in the critically-acclaimed STEINS;GATE series. From the depths of despair--explore a whole new world line. Your favorite characters return alongside a brand new cast! STEINS;GATE 0 continues the time travelling theme - but adds artificial intelligence as its central hook. Help a group of young students bend time to their will and prevent the onset of World War 3. Visit Nintendo eShop for STEINS;GATE 0